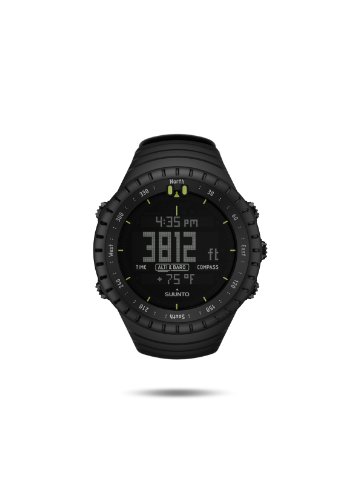 The weather was clear for days as your expedition ascended 10,000 feet, but then the barometric pressure started to change and your Storm Alarm went off. Thanks to the Suunto Core Altimeter Watch, you set up your high-altitude camp ahead of the big storm and are in your sleeping bag sipping hot cocoa before it hits. Bravo.Building on the success of the venerable Suunto Vector, the Suunto Core keeps you informed of conditions while you hike, bike, or camp, making it a terrific companion for outdoor enthusiasts of all stripes. What can the Suunto Core do for you? For starters, it can sense an approaching squall even when the sky looks clear. This intelligent Storm Alarm--one of several intelligent features designed to keep you safe and secure--is activated by a rapid drop in air pressure over a three-hour period. Once the Core senses the change, the Storm Alarm sounds and flashes, letting you know that something unpleasant is fast approaching. The built-in altimeter, meanwhile, displays your current elevation, shows how much you ve climbed or descended, and records your entire session for later analysis. Accurate to within 30,000 feet, the altimeter is an extremely valuable tool for mountaineering, backcountry skiing, and wilderness travel. Add in such additional features as a barometer, a digital thermometer, a weather trend indicator, and a digital compass and you have a terrific wrist-top computer for almost all your outdoor needs.

The altimeter contributes to your excursion in several ways. If you re standing on or near an obvious geographic feature, such as a ridge, trail, or creek, the altimeter can alert you to your current elevation and help you find your position on a topographic map. Similarly, if you plan on climbing a slope to a certain elevation and then traversing, the Core can help you stay on course. And as a bonus, the Suunto Core includes a unique start-from-zero function, so you don t have to enter a reference altitude. Instead, with the single push of a button, the altimeter will begin tracking your ascent and descent.

The Core also includes a barometer, which measures and records air pressure to help you predict changing conditions--from sunny skies to hair-bending electrical storms. The barometer helps you decide whether to bring a soft shell or rain shell jacket when the skies look ominous, or even when to high-tail it back to the car. In general, low pressure brings inclement weather, while high pressure brings stability and clear skies. If you ve arrived at camp and notice the pressure starting to plunge, it s probably a good idea to secure the tent and crawl in. Likewise, if you were on a climb, it would be prudent to find shelter and retreat. Even at home, the Suunto Core barometer can look beyond office walls, skyscrapers, and nearby hills to help you plan for upcoming activities.

If you want a weather forecast that extends out a few hours, you can turn to the built-in weather trend indicator. The indicator shows the barometric history for the last three and six hours, helping you predict the weather with amazing accuracy. What s more, the watch doesn t give you a regional forecast posted earlier in the day, but rather the most current information about the weather directly overhead. And no outdoor watch is worth its salt without a digital compass, a great tool for keeping track of your direction while skiing, hiking, or exploring a new city. You can set and follow a bearing with a traditional rotating bezel, or simply point the top of the watch toward your intended destination and lock it in.

Additional features include several traditional watch functions, including dual times, a date display, and an alarm; predicted times for sunrise and sunset to help you maximize your daylight hours; an automatic Alti/Baro mode that senses movement or lack thereof and switches between the altimeter and barometer accordingly; a depth meter that provides accurate water depth readings to 30 feet; and the ability to function in English, German, French, and Spanish. Available in such colors as all black, aluminum black, light black, black orange, aluminum brown, light green, black yellow, and steel , the Suunto Core carries a two-year warranty.

About Suunto
Suunto was founded in 1936 by outdoors man and a keen orienteering enthusiast, Tuomas Vohlonen, who had long been bothered by a problem: the inaccuracy of traditional dry compasses and their lack of steady needle operation. Being an engineer with an inventive turn of mind, he discovered and patented the production method for a much steadier needle, better readings, and a new level of accuracy.

By 1950 the company was exporting compasses to over 50 countries around the world, including Canada and the United States. In 1952, Helsinki was hosting the Olympic Games, and the torches carried to light the Olympic flame were Suunto products. The next step was improving the stability and accuracy of marine compasses. The first marine compass, the Suunto K-12, was launched onto the market in 1953. In 1957, Suunto started manufacturing hypsometers, which measure the height of trees.

In the 1960s, the compass range grew further and Suunto introduced its first diving compass--initiated by the divers themselves. A British sports diver attached a Suunto compass to his wrist and found that the device also worked underwater. Thanks to his feedback and initiatives, the new business category was found. Suunto s exports and business grew steadily and Suunto then focused on combining its strength in precision mechanics with new skills in electronics. Accuracy, reliability, and ruggedness have been Suunto s key values from the very beginning of the company history.

Today, Suunto is a leading designer and manufacturer of sports instruments for training, diving, mountaineering, hiking, skiing, sailing, and golf. True to its roots, Suunto is today the world s biggest compass manufacturer. Prized for their design, accuracy and dependability, Suunto sports instruments combine the aesthetics and functionality of watches with sport-specific computers that help athletes at all levels analyze and improve performance. Headquartered in Vantaa, Finland, Suunto employs more than 500 people worldwide and distributes its products to nearly 60 countries. The company is a subsidiary of Helsinki-based Amer Sports Corporation with the sister brands Wilson, Salomon, Atomic, Precor, and Mavic.